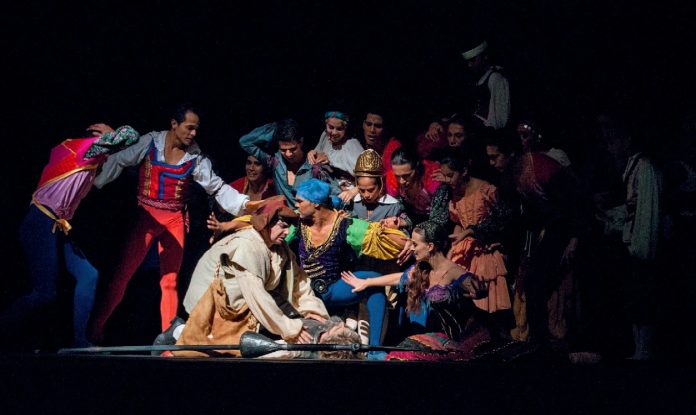 Walton Burns talks about how to use play scripts to teach pragmatics – even online!

Shakespeare wrote “All the world’s a stage and all the men and women merely players.” (As You Like It, Act II, Scene VII).

If it is true that we are all actors, then we are constantly improvising as we go about our lives talking to people and trying to get things done. We don’t follow a specific pre-determined script. That being said, as speakers of English, we have been improvising together for a long time and we’ve come up with some principles and parameters.

For example, we agree on how the “buying things at the store” scene should generally go. We also recognise that there’s a loose set of verbal and non-verbal cues that mean, “I like you and would like to continue meeting with you,” as well as a set of cues that mean, “I don’t like you, please stay away,” and so on.

However, our students come from different cultures and different schools of theatre (to extend the metaphor). Some are Shakespearean actors and others are modernists. As teachers, we have to help them figure out the rules to fit into our little troupe.

Now, our students often want to focus on the direct and literal level of language: grammar, vocabulary, pronunciation. That’s understandable, but these unwritten rules of cultural improvisation, or pragmatics, are just as important for effective communication.

Think of a simple phrase such as, “What are you doing here?” The meaning of this utterance is almost completely dependent on the context, the speaker and the way it is said. Imagine someone saying this to their partner, who has just surprised them at work with a lovely gift. They mean, “Thank you, what a great surprise, I love you.” Now imagine a police officer saying it to a teenager breaking into an abandoned building, spray can in hand. Very different meaning! Very different intonation and body language!

The Play’s the Thing

What better way to teach students these rules of spoken communication than through scripted plays? Plays are essentially stories of characters trying to navigate relationships and achieve goals with words, much like real life conversation.

A good playwright will also mimic authentic conversation, including high-frequency language and idiomatic expressions and colloquialisms. Most importantly, play scripts highlight how we choose our words, grammar and rhetorical strategy in order to do different things with words: apologise while minimising repercussions, persuade someone to do something they don’t want to do, get out of a commitment and so on. Unlike a recorded conversation, play scripts are written down, so students can read, reread and analyse.

Here’s a great way to use scripts in the classroom. It’s from The Drama Book: Lesson Plans, Activities, and Scripts for English-Language Learners by Alice Savage.

Find a short scene from a play or movie where the characters have clear goals. This works best if the scene and characters are unknown to the students (The Drama Book has a set of five scripts dedicated to this purpose). Put students in pairs and have them read the script while they answer the following questions:

Stress that there may be more than one right answer. The idea is to have students analyse the text for information about relationships and feelings. Often, they’ll be shocked at how much you can tell about a person and their context based purely on language.

Discuss the strategies the characters use and how successful they are. How can you figure out the strategy based on the language used? What kind of intonation and body-language would the speaker use to express their intention?

Now have the students read the script according to their answers to the above questions. As they read, draw attention to the way the different assumptions lead to different readings. Be sure to include concrete and specific details. For example, if the group decides one character is being sarcastic, discuss what sarcasm sounds like. How do we show it in our face and bodies? Have students practice a sarcastic tone.

Another pair might decide the scene is between a mother and son. The actor playing the son might be a bit whiny and defensive. Talk about why we act defensive and how it shows in our bodies and voice. Have students slump their shoulders or practice lashing out in anger!

From here, you can have students rewrite the scene to more fully reflect their characterisations. This helps students understand how our choice of words and even grammatical structure depend on the context. A co-worker and boss will use more formal grammar and indirect language, even if they are arguing furiously. They will also rely more on logical reasons. A husband and wife will use informal grammar, even sentence fragments, while fighting, and may include more personal attacks and emotional manipulation to try to win the fight.

Finally, students can apply what they’ve learned to a new scene, perhaps one that is relevant to their lives. Help them transfer useful language, strategies and acting performance.

This activity can be used as a warmer to help students embody language through physical movement, expressions and gestures that evoke a setting. The activity should take around 15 or 20 minutes.

Prepare by making up slips of paper with individual activities written on them. Examples of activities include:

Preview any unknown vocabulary (e.g., wade, jet lag). Put the slips in piles. Have a volunteer come up, take a slip, and mime the activity. Tell the rest of the class to shout out guesses until they get one right. Then have another volunteer or volunteers come up.

As a variation, you can pair students and give them five minutes to plan a silent scene together. Then have them take turns acting out the scene for the class to guess.

Drama in the Time of Distance Learning

In our new world of distance learning, students can still work with scripts. You may need to send them the scene first and have them read and analyse it alone, or in a chat with another student outside of class. If you have interactive class time, students can still act in class. Otherwise they may need to record themselves and send the recording to you. They may have to do this in isolation, or they may be able to use an online meeting app, or even TikTok, that lets them interact with others. Students can collaborate on writing a script using Google Docs or similar apps.

One powerful and simple activity from The Drama Book that works very well online is to have students think of a mood and express it using just their bodies and gestures. Shut off their mics so they can’t talk at all. Let other students guess the mood. Then do the inverse. Have students think of a mood and improvise a few lines in that mood. Shut off their cameras so they only have their voices to express themselves. Have other students guess the mood and then discuss how that mood showed through.

Drama is a powerful tool for teaching authentic and natural communication. This lesson plan is only a beginning framework, so get out there and play with language!

Business Vocabulary in Use: Advanced

Book of the Month