In the last decade, Irish EFL has spread out from its three original centres: Dublin, the youngest capital in Europe; “cool, casual and affordable” Cork in the South; and Galway, the beating heart of Irish culture, in the West.

A curious language traveller could drive south from Dublin to find schools in the coastal town of Bray in county Wicklow, or further inland to rural county Kildare. Then on to coastal Wexford and the rural counties of Kilkenny and Carlow, or further south to Waterford, the oldest town in the country, before arriving in Cork.

But it is the west of Ireland which has opened up the most, with accredited schools now to be found from Tralee in County Kerry through to the pretty country town of Ennis in County Clare. Limerick, long known for its university language centre, is now home to at least one accredited language school.

To the north, past the university town of Galway, we come to Sligo on the rugged northwest coast of Donegal. But that is not the end of our journey, because when it comes to language schools, the famous Irish border remains invisible. Already the association MEI Ireland has one member school in the Northern Irish capital of Belfast.

With Brexit looming, can we expect to see more schools: not just in the North, but all over the Emerald Isle? 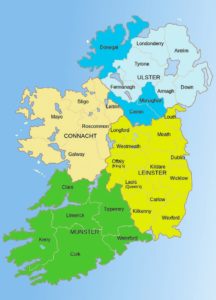 The destinations listed above in our whistle-stop tour of Ireland are home to language centres which are members of Marketing English in Ireland (MEI).

There are many other schools in Ireland, but since the government announced that the country’s accreditation system was to be replaced in 2011, it has become increasingly difficult for new schools to apply to be accredited, and a number of mostly unaccredited schools have closed.

MEI, which only accepts accredited schools as members, also does due diligence on new members and requires all its schools to run police checks on both staff and host families. It also guarantees a free place at another school in the event of the unexpected closure of a member centre.

The island of Ireland is divided into 32 counties, with 26 counties in the Republic and the rest in Northern Ireland, which is a semi-autonomous part of the UK. Tourism and, to an extent language travel, is seen as a cross-island industry.

Head west to find the best of British