Is it time to dump Received Pronunciation? Most British people don’t use it any more and yet we keep teaching it. Perhaps we could drop the idea of a single standard altogether, writes Mark Hancock

Everybody has an accent. Nobody is exempt, although many of us perhaps feel we are. That’s because we tend to perceive other people’s accents relative to our own, which we perceive as neutral and accentless.

An accent may come to be considered as ‘standard’, and again this may be perceived as neutral and accentless by the people who speak it. Hence the nonsense phrase, ‘getting rid of your accent’. On the face of it, this is impossible – but clearly, what it means is developing an accent which is more like the one which is considered ‘standard’.

Speaking with a ‘standard’ accent confers advantages – opportunities may be denied to people ‘with an accent’. This is what lies behind the once-popular elocution lessons – people seeking to improve their life prospects by modifying their speech. However, we should remember that ‘standard’ does not mean better: as Linguist John Wells put it, ‘… a standard accent is regarded as a standard… not because of any intrinsic qualities it may possess, but because of an arbitrary attitude adopted towards it by society…’ (Wells 1982 p. 34). 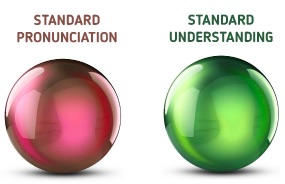 In Britain, the accent long seen as standard is ‘Received Pronunciation’ (RP), where the word ‘received’ is used in the sense of ‘accepted’. In elocution lessons, RP is typically the target model, and ELT has followed the lead: pronunciation teachers have been expected to present the RP model to their students. But can RP be plausibly described as ‘standard’ in the sense of ‘widespread’? Geoff Lindsey of University College, London, argues that it can’t today.

In his recent book, English After RP, Lindsey explains that RP is usually represented by a set of phonetic symbols chosen over half a century ago by A. C. Gimson. He makes the point that if a person speaks in exactly the way these symbols indicate, they will sound comically old-fashioned. He suggests using alternative phonetic symbols which would be more appropriate for modern Standard Southern British English, but makes the point that if we are to stick with the symbols chosen by Gimson, we will need to avoid taking them at phonetic face value – the symbols no longer accurately describe the facts.

The bigger claim in Lindsey’s book is this: that as a model for learners of English, RP is outdated and needs to be replaced by something more up-to-date, and this may be called Standard Southern British English (SSBE). This message will be greeted with pleasure by many teachers, wary of the whiff of elitism often associated with RP.

The idea of keeping the description of our standard accent up-to-date seems reasonable, but I do wonder about the implication of using this as the model in ELT. To me, this seems like teaching pronunciation as if it were an elocution lesson: changing your accent to conform to a standard in one particular nation. Is this really appropriate for the majority of learners of English in the world today? I suspect that it is probably not.

In her book The Phonology of English as an International Language, Jennifer Jenkins makes what I consider to be a crucial point: English is no longer just another language; it is a Lingua Franca. This must have implications. Most learners of English today will end up using it to gain access to a global speech community, rather than for spending time in a country where English is spoken. 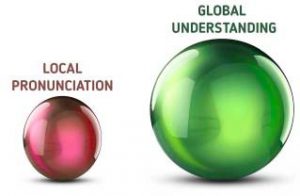 In Brazil, there is an expression para inglês ver (‘for the English to see’), meaning ‘just for show’ – something you would do not for any practical purpose, but only to impress some onlookers. This seems like a good description of the elocution lesson’s goal: pronouncing to impress the English. In the global speech community, there is no specific reason to want to impress the English. In the world of English as a Lingua Franca, pronunciation is a working tool of communication, not just something ornamental.

We need to revisit the question of standards. For English as a Lingua Franca, if RP is not appropriate, nor SSBE, then what should we replace these with? I think we should consider the possibility of not replacing them with anything.

This is not such a radical suggestion – it is not unlike what happens already. In most classrooms around the world, the main pronunciation model for the students is the teacher, and the vast majority of these do not have a ‘standard’ accent themselves.

I think we can afford to take a looser, more flexible attitude in pronunciation teaching. Take phonemic symbols, for example. I agree with Geoff Lindsey that if we are to stick with the symbols chosen by Gimson, we will need to avoid taking them at phonetic face value. But I would go a step further and say we should avoid taking any symbols at phonetic face value: this kind of precision is not helpful in teaching English as a Lingua Franca.

Let’s say that the traditional, elocution model of pronunciation teaching is symmetrical with regard to the productive and receptive skill: everybody learns to speak with the same standard accent, and everybody can be expected to understand others speaking with that same standard accent. What I am suggesting is asymmetrical: everybody strives to develop the most intelligible possible version of their own English accent, but at the same time, they need to be capable of tolerating a wide variety of accents receptively. In short: pronounce locally, understand globally.

■ Jenkins, J. (2000) The Phonology of English as an International Language Oxford, OUP

We know it makes sense