What do we mean by ‘native speaker of English,’ and who should set the standards, asks Rakesh Bhanot

Without thinking too hard, imagine a group of native speakers of English. You will have your own picture, but it’s usually a bunch of adults. Look more closely and see if the picture includes people from different parts of the world, or are they all similar in appearance?

About 35 years ago, A C Gimson, Professor of Phonetics at UCL, surmised in an interview that, “British English and Australian English would be mutually unintelligible in a hundred years’ time”. I am not sure that Gimson was thinking of the idea of different Englishes (perhaps just different pronunciations), even though the idea of World Englishes has been with us for more than 50 years.

The concept of a standard English with its own (received) pronunciation was abandoned, in some quarters, a long time ago. I once heard David Crystal say that the first letter sent by one of the Pilgrim Fathers would, in a very stretched sense, have been written in American English. So, what do we mean when we talk of “English”, and whose English is it anyway?

To misquote Yeats, it could be argued that the centre of the English language cannot hold. It has been, drifting, shifting, creating new ‘centres’ (‘centers?’) for centuries. 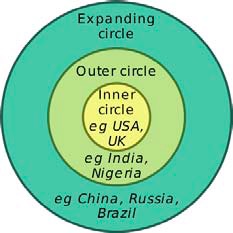 Some people argue the walls between Kachru’s circles have leaks. For example, Kachru himself, a native from the outer circle, was firmly rooted in what he called the inner, ‘norm-giving’ circle. In recent years, increasing migration, and the adoption of English as a national language former British colonies, has further distorted the concentricity of these circles. Today, not only do we have more speakers of English as a second language than native speakers, the very notion of who is a native speaker of English has rightly been called into question. This term needs to be re-examined, because in the eyes of many, ‘a native speaker’ of English still conjures up images of a fair-skinned person with ‘European’ features.

‘Native speakerism’ (Holliday) is alive and well, partly because of naive assumptions on the part of parents, providers, policy makers and learners from all over the world, that the phrase ‘native-speaker teacher’, the words ‘native speaker’ carry more pedagogic status than ‘teacher’; more status even than ‘qualified non-native teacher’. The issue becomes more muddied when the speaker of the language does not conform to some stereotypical, light-skinned norm.

It is appropriate to raise the issue of what some call ‘chromatism’ (prejudice based on the shade of one’s skin) at a time when IATEFL welcomes its first non-European and black African President, Harry Kuchah Kuchah, this month.

I started teaching EFL in 1972 and have witnessed many changes in our profession. The late David Graddol recently pointed out that in South Korea, students and their parents are no longer automatically choosing fair-skinned native-speaker teachers over non-native, qualified/experienced teachers. Indeed, South Korea and other countries are increasingly choosing to send students (and professionals) not to the US or the UK, but to a major new player on the scene – the Philippines.

A former US colony with English as an official language, the Philippines claims to be the ‘world’s third largest English-speaking country’. According to Dr Aiden Yeh from Wenzao Ursuline University of Languages, Taiwan, “The Philippine Department of Tourism is heavily tapping into the ELT market and building the country’s niche as the place to go to for ESL”. The sales pitch relies on the low cost, warm tropical climate and fine beaches.

At the same time, this is a powerful assertion that the English language is “ours”! Philippine English is spoken almost everywhere, and the learners can have meaningful exchanges with the locals.

However, researchers have highlighted that some students find the local accent difficult to understand. There is also the tendency to codeswitch and talk in ‘Taglish’ (a hybrid of English and Tagalog). But on the whole, the students seem to be satisfied with the teaching. Most of the teachers are qualified and schools have to conform to strict accreditation criteria.

Last month, The Linguistics Society of the Philippines celebrated its 50th anniversary – all in English, of course, and mentioned the forthcoming publication, Philippine English: Development, Structure and Sociology of English in The Philippines, edited by Ariane Macalinga Borlongan. This is the comprehensive and definitive guide to Philippine English, firmly establishing the islands as one of the major hubs of English in the world. And, of course, Malta and Eire are fast-growing centres for learning English too.

So, whose English is it anyway? I wonder what Gimson would have made of all this?

Images courtesy of Pxhere and Administrator

The gathering storm - as governments wind down their Covid-19 emergency support packages, the real damage to international education is likely to be done, writes our editor Melanie Butler https://www.elgazette.com/the-gathering-storm/